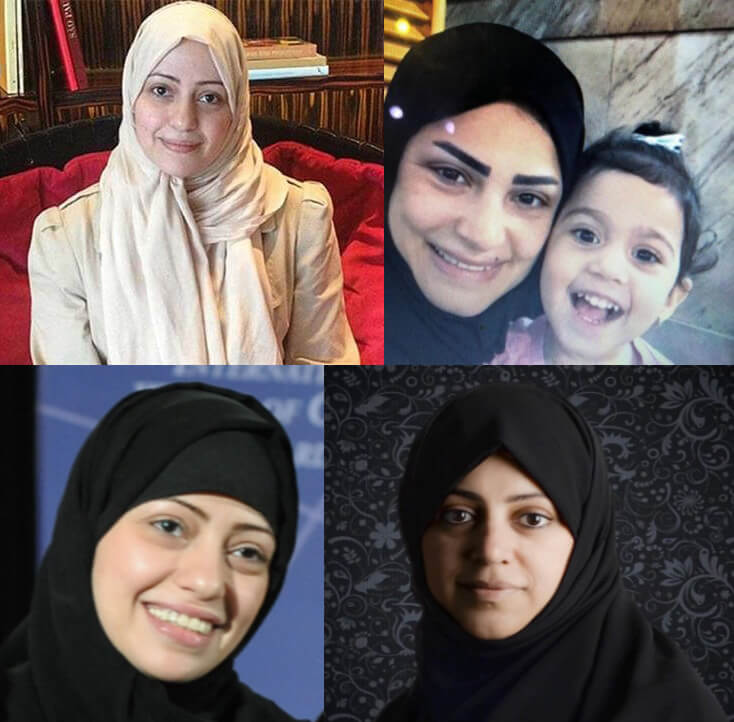 Alongside Loujain al-Hathloul 4 others remain in prison

As the world awaits Loujain al-Hathloul’s release this week (expected Thursday 11 February), it is important to remember two crucial points.

First – she will not be free in any meaningful sense. She remains under probation, under a travel ban and unable to express herself freely.

Second – she is not alone.  Loujain al-Hathloul is rightly feted for her fearless campaigning for women’s rights. This briefing seeks to shine a spotlight on the women who partner Loujain in the campaign for human rights in Saudi Arabia. Some are better known than others, but none enjoy the profile of Loujain in the international community.

This briefing seeks to address that issue with a very clear purpose.

If Loujain is released as expected the Saudi authorities and their expensive PR teams will tell the world that the matter is closed. But nothing could be further from the truth. Saudi Arabia must not be allowed to sweep the abuse of these women under the carpet. We must demand justice for all women in Saudi Arabia. Women human rights defenders must be released. This report seeks to play a small part in that fight.

This report details 10 profiles in courage in three categories:

The Victims of the 2018 crackdown on women’s rights activists 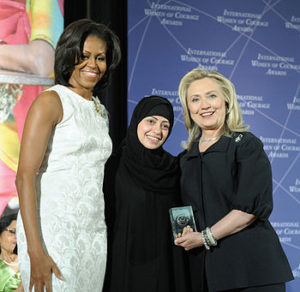 Samar Badawi with Hillary Rodham Clinton and Michelle Obama in 2012.

June 24 2018 should be a great day for women’s rights activists in Saudi Arabia – it is the day that the ludicrous and outrageous ban on women driving was finally lifted. Instead, the authorities crushed any sense of progress with a brutal crackdown on the women who had led calls for reform. From May to July 2018 at least 13 activists were arrested in the Kingdom’s first coordinated mass arrests of women’s rights campaigners.

Of those arrested: Alongside Loujain al-Hathloul 4 others remain in prison:

The Women at the forefront of the fight for Shia rights

The Shia minority in Saudi Arabia are subject to a regular diet of oppression and abuse at the hands of the authorities. With such blanket discrimination, it is no surprise to see women playing a leading role in the struggle for reform.

We profile four such women:

Women Writers Targeted by the regime

Grant Liberty has previously published analysis of the more than 50 journalists arrested or abused in the MBS regime . In the last four years journalists have been murdered, mysteriously died in custody, physically tortured in the most sickening ways and held in the psychological torture of prolonged solitary confinement. Here, we focus on two women:

The Victims of the 2018 crackdown on women’s rights activists

Nouf Abdulaziz – arrested 6 June 2018
In May 2018, Loujain al-Hathloul, was arrested as the crackdown on women’s rights activists began. Nouf Abdulaziz, a campaigning journalists who has written about women’s rights and political motivated arrests in Saudi Arabia , spoke up in her defence. That ‘crime’ was enough for her arrest. Nouf is believed to have been tortured and sexually assaulted.

Maya al-Zahrani – arrested 9 June 2018
Mayaa al-Zahrani was arrested in the Summer 2018 purge, for the crime of publishing her friend Nouf Abdelaziz’s open letter. In her time in prison she has been tourtured, sexually assaulted and held in solitary confinement. Mayaa was arrested within hours of posting her distress at her friend Nouf’s arrest.

Samar Badawi – arrested 30 July 2018
Samar Badawi is a multi-award winning women’s rights activist , who has been imprisoned on multiple occasions for her role in fighting two of Saudi Arabia’s most egregious anti-women laws, the driving ban (now rescinded) and the male guardianship law. In 2018, she was arrested on July 30 as the authorities’ summer purge came to an end. Since her arrest she has been victim to the systematic abuse of her human rights in prison including torture and sexual assault.

Nassima al-Sadah – arrested 30 July 2018
In 2012, as a leading proponent of the Women2Drive campaign al-Sadah mounted a legal challenge against the authorities refusal to allow women the right to drive. Three years later, Nassima announced plans to stand as a candidate in the 2015 municipal elections before her inevitable disqualification by the authorities. Three years later – alongside Samar Badawi – Nassim was arrested. Amnesty International report that on her arrest Nassima. ‘She was held in solitary confinement for a year and was often not allowed to see her children or her lawyer for months at a time.’

The Women at the forefront of the fight for Shia rights

Israa al-Ghomgham – arrested 8 December 2015
Incredibly, outrageously, Israa al-Ghmogham was threatened with the death penalty for the crime of attending a peaceful protest. As parts of the Arab World rose up during the Arab Spring, the Shia community of Saudi Arabia took to the streets. Israa al-Ghomgham was one of those who stood up for her community and spoke out against that oppression. She is accused of joining the protests and posting images and videos on social media. In December 2015 – as the region was once again engulfed in protests, the Saudi Secret Police raided her family home and arrested Israa and her husband, Moussa al-Hashem. For more than three years – enduring arbitrary detention without trial – and in spite of UN demands for her release – Israa faced the death penalty. Although, following international pressure, that request was dropped in 2019, Israa remains in prison.

Naima al-Matrood – arrested 13 April 2016
Naima has been described as an internet activist – in common with many of those arrested for campaigning in Saudi Arabia, her alleged crimes appear to boil down to protesting and calling for human rights and social justice on social media platforms. After being held without trial for a year, Naima was tried on charges including for allegedly participating in a number of anti-state demonstrations and rallies, being linked to a media cell, and violating public order by creating two social networking accounts on Twitter and Facebook to demand the release of some detainees. In November 2017 Naima was convicted and sentenced to six years in prison followed by a six year travel ban. The Gulf Centre for Human Rights reports that during her time in prison, Naima’s health has deteriorated due to anaemia resulting in a degree of impairment to her vision.

Fatima Al-Nassif – arrested 5 September 2017
As the Qatif uprising continued in 2017, Fatima al-Nassif in September of that year was beaten and arrested by Saudi authorities, according to reports, for the ‘crime’ of bandaging protesters who peacefully protested. Since her arrest, she has been periodically held incommunicado, resulting in a heartfelt open letter from her daughter, Shahed in which she spoke of the pain of her mother’s enforced disappearance.

Noor Al-Muslim – arrested April 2018
Noor al-Muslim is a visual artist a student and campaigner – and imprisoned at just 20 years old. She is believed to have been arrested after participating in community committees to protect and monitor mosques after a series of attacks on Shia sites in 2015 and 2016.

Women Writers Targeted by the regime

Khadija al-Harbi – arrested 4 April 2019
Khadijah was arrested alongside her husband, Thumar al-Marzouqi, and a host of other writers, activists and lawyers. What makes Khadijah’s case particularly notable is that at the time of her arrest she was in the late stages of pregnancy. Since her arrest Khadijah has remained in prison without charge. She has been refused access to a lawyer, and disgracefully, she was forced to give birth to her child behind bars.

Maha al-Rafidi – arrested 28 September 2019
Maha al Rafidi was a trainee journalists at the Saudi newspaper al-Watan at the time of her arrest in late 2019. She was arrested in a night-time raid by approximately 30 members of the Saudi security forces. Shortly after she was seen with bruising to her face. She has been held for prolonged periods in solitary confinement and without charge. Her arrest is believed to be connected to tweets in support of human rights, including for the release of prisoners of conscience. As of January 2020, she was reportedly held in solitary confinement and subjected to ill-treatment at Sha’ar Prison. 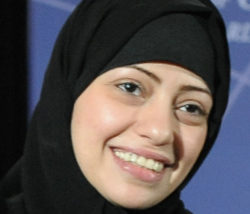 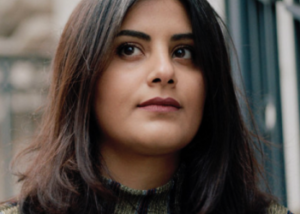