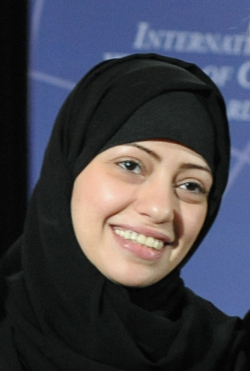 Manner of arrest: Arrested in an armed police raid on her home in the early hours of the morning and taken to a detention centre of the State Security Presidency

Alleged crimes: She participated in the 2011–2012 women's driving campaign and has further assisted women drivers with police and court procedures.

Updates on trial: On 20 February 2020, the second hearing of the case of woman human rights defender Samar Badawi was held at the Specialized Criminal Court. International observers were not allowed to attend the hearing.

Following her arrest on 30 July 2018, the woman human rights defender was subjected to a prolonged investigation, during which she was tortured and sexually harassed. The first hearing of her case was held on 27 June 2019. She is facing charges including sharing information related to Saudi women’s rights with foreign organisations and officials. If found guilty, she could face up to 20 years in prison. She is currently held at Dhahban Prison.

Previous arrests: Samar Badawi was arrested in 2010 on a charge of disobeying her father and was imprisoned for six months. In 2016 she was arrested and briefly held in Dhahban Central Prison for interrogation; in 2017 she was again summoned for questioning.