Menu
The tale of two Septembers: Why Salman Alodah is in prison?

The tale of two Septembers: Why Salman Alodah is in prison?

“May God harmonise between their hearts for the good of their people” sounds like a nice innocent prayer of a dozen words. Normally, nobody should get mad at you for that. After all, what is better than asking for harmony between hearts and nations? Not in Saudi Arabia!

Less than innocent 66 Twitter characters were enough to put one of the most celebrated Muslim scholars globally in prison. 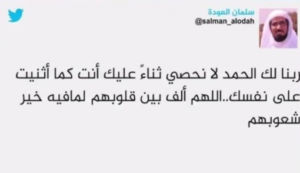 Screenshot of the tweet which led to AlOdah’s arrest.

Saudi, where the holiest sights of Islam are located, does not have a ban on prayers. And while the increasingly social-media savy Saudi officials may envy Alodah for his 13million+ Twitter following, it was not the exact reason for his arrest.

Days before Alodah’s arrest, Saudi authorities had sent a memorandum to famous religious scholars to tweet in support of the Saudi government’s position in its row with Qatar. There is nothing uncommon about such directives from Saudi authorities to religious scholars. Many Saudi scholars abide by the directive while a few kept silent. But Alodah didn’t do either. He tweeted for peace not war.

But in the new era in Saudi, neutrality does not have a place. Anything less than absolute obedience brings the wrath of the ruler.

In the case of Alodah, the tweet was only an excuse. Saudi authorities had already been on his case since years. They had not forgotten how Alodah did not hide his support for the Arab Spring revolutions in 2011. They also had kept a record of his public call for the royal family in March 2013 in which he had demanded the release of prisoners of conscience. Moreover, the ban on his book ‘Questions of Revolution’ from 2010 in which he had discussed political reform was still on.

Saudi royal family were well aware of Alodah’s reformist ideas. In fact, the current Crown Prince was once a visitor to Alodah’s house where he spent hours listening to Alodah’s road-map for a better Saudi. Then just a young prince in the few thousands strong Saudi royal family, Muhammed bin Salman listened to Alodah with a fanfare. He invited Alodah for a visit to their home where Alodah repeated his ideas about reform, this time in the presence of Salman bin Abdulaziz, the current king of Saudi.

It is not clear what had been the intention of the young prince’s interest in hearing Alodah’s ideas on reform in person. And according to Alodah’s son, Abdullah, who is a scholar at George Town University, the young prince had seemed enthusiastic and in agreement with what Alodah had to say. But people change.

Salman Alodah himself has had his own share of change and personal transformation, but to the better.

In the early 1990s, Alodah, a young university lecturer, was known for some of his conservative views about most religious topics. Today, he is one of the most celebrated voices of the moderate interpretations of Islam. In the post 9/11 era, Saudi authorities seek Alodah’s help to use his influence, legitimacy and popularity amongst the religious Muslim youth to discourage them from joining the war-zones in Iraq and Afghanistan.

Alodah was transparent about the change that had taken place in his thinking. He produced the ‘Yes, I change’ series where he argued strongly for why change in views, including religious ones, is necessary. He was ready to take on the backlash from certain quarters of his following. In response to them, Alodah said, “No one can restrict my freedom of thought; neither rulers nor followers”. 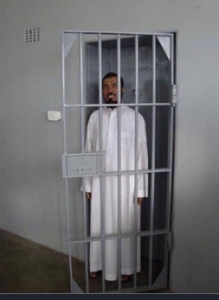 One thing that remained a constant in Alodah’s life was the cost of his freedom: prison.

In June 1992, Alodah joined a list of university professors and scholars in signing the ‘Advice Memorandum’ which was a letter to King Fahd bin Abdulaziz demanding political, social and administrative reform.

Alodah started using his mosque’s pulpit and his lectures at university to discuss his ideas about the need for political reform.

In 1993, Alodah was dismissed from his position as a university lecturer. In September 1994, Alodah was arrested. His arrest led to protests against the Saudi authorities which were extremely rare. The protests were known as ‘Al-Buraidyah Uprising’. Hundreds of his supporters were arrested. Human Rights Watch called the arrests the largest in recent Saudi history.

Alodah was held in prison for five year, without trial. He was released in 1999.

His tweet from September 2017 took him back to prison but this time under much harsher circumstances.

Between 1994 and 2017, Alodah’s popularity, influence and age had grown but so had Saudi ruling family’s impunity.

From the get go, Alodah was mistreated. According to his family’s testimonies, Alodah faced verbal and physical abuse on the day of his detention. The way he was arrested displace a complete lack of respect by the Saudi authorities to the popular scholar.

He was held away from family and lawyers for six months. And his health got so bad that he had to be taken to the emergency hospital few months into his arbitrary arrest.

He was left handcuffed and blindfolded in solitary confinement. He was also deliberately deprived of sleep.

These are only the details we have been able to know thanks to his family’s struggle to leak any piece of information on Alodah’s well-being.

According to his son Abdullah, at some stage of his imprisonment, Alodah’s would be left handcuffed while he will be thrown food in small closed bags. Unable to use his hands, Alodah would use his teeth to open the bags of food damaging his teeth in the process.

Saudis watch the tragic circumstances of Alodah and many other famous scholars in silence. They know the cost of showing solidarity would be too high.

The year before, Alodah lost his wife and one of his kids in a car crash. Millions in Saudi and across the globe expressed solidarity. Many of Alodah’s fans got to see a side of Alodah that they had not had the chance to see before: a devastated husband and father who eulogized his loss in a video clip that has been seen several million times on YouTube.

Months later, Alodah produced a show specifically for those people who have lost a loved one and wanted to heal. It was seen over 2 million times in less than 48 hours of its release.

Alodah could very well be the Muslim scholar with the largest network on social media with 13 million followers Twitter, 7 million likes on Facebook, 2 million followers on and Instagram and several hundred thousands fans more across the other platforms.

But many millions have to hide their sympathy with Alodah to themselves, for now. The new ruling figures of Saudi have zero tolerance policy towards any form of dissent even if it was a tweet, a like or a comment.

After months of being held in prison, Alodah was finally put on trial. The public prosecutor had a long list of 37 crimes that Alodah had allegedly committed.

A look into the alleged crimes that Alodah is accused of reveals a lot about the tragicomic direction the Saudi authorities have taken. It includes things like owning banned books in the library and failing to pray for the ruler. He is also accused of causing corruption by his demands for reform.

In September 2017, the Saudi prosecutor asked for the execution of Alodah. The news shocked many people around the world. It was yet just another proof that in the era of the new Crown Prince, the worst case scenario is the most possible. 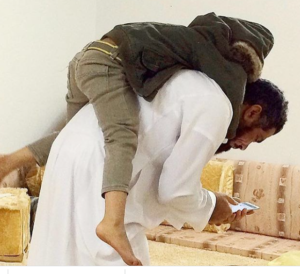 Before going into prison, in the eulogy for his wife and kid, he wrote, “Once upon a time, there were a few birds in a cage. One day, suddenly, the mom and one of her little birds flew out of the cage. They waited outside for the other birds. The mom would always say: Tomorrow the birds will fly”

September of 1994 was the first time Alodah saw a prison cell. He was taken again to prison in September 2017. Between these two Septembers, Alodah spent his life writing, lecturing and living a full life.

Alodah is still in prison, but his soul, vision and contributions are far from being caged. And there are many millions around the globe who want to see the tomorrow where all birds can freely fly out of their cages.